QuestionPro provides powerful online survey software designed to help you make better business decisions. Our easy to use software includes tools for creation, distribution, and analysis of online surveys, polls, forms, and quizzes. Use our advanced features to completely customize the survey experience and power sophisticated analysis. Best of all, our customer support team is available 24-hrs a day to guarantee your project is a success! QuestionPro includes multiple pre-built survey templates and more than 30 question types, which can be used by companies to create questionnaires and personalized surveys. It offers tools to reach respondents through email, integrated pop-ups, and survey posting on social networks including Facebook and Twitter. With over 10 million users across 100 countries, we have provided survey software to Fortune 100 companies, academic institutions, small businesses, and individual researchers for over ten years. 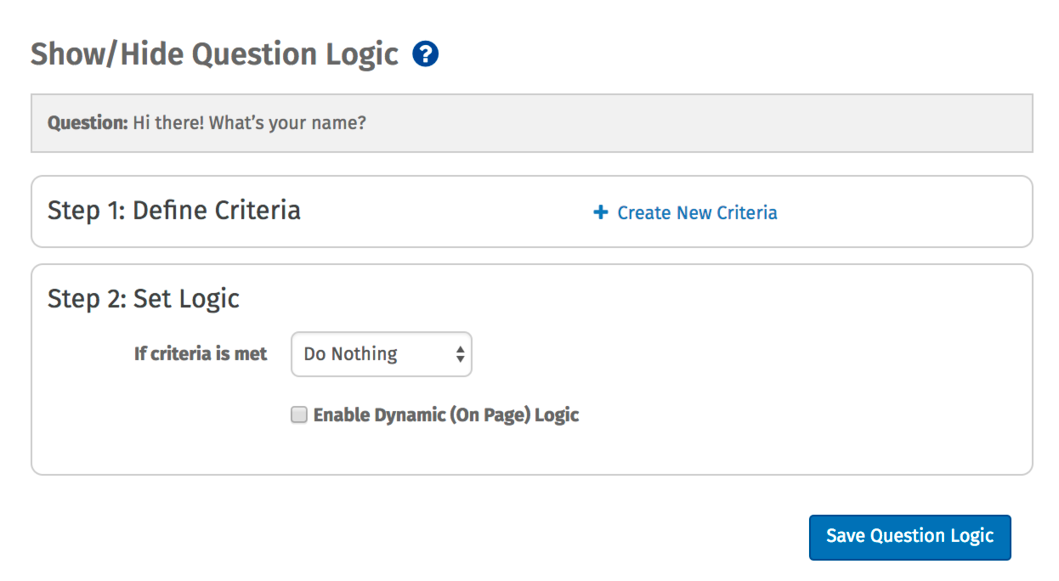 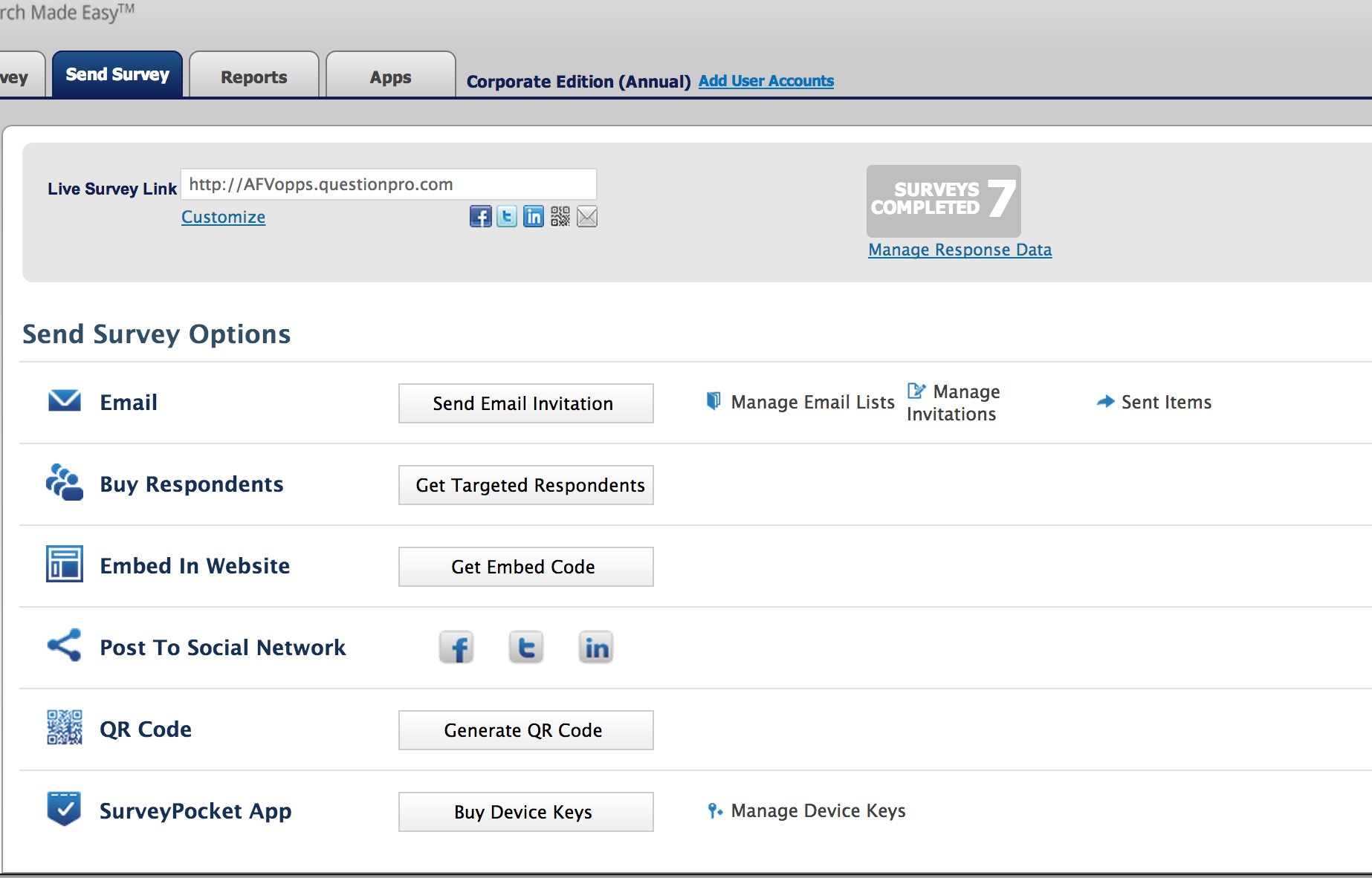 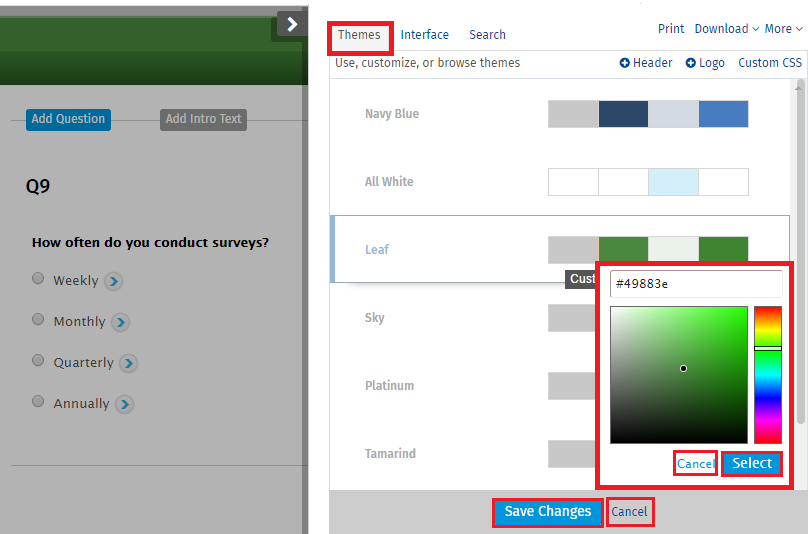 QuestionPro has a free version and offers a free trial. QuestionPro paid version starts at US$85.00/month.

0 (33 Reviews)
Voxco Online is multichannel survey software for data collection any place, any time. The solution is made for (and by)...
Compare Visit Website

4.5 (276 Reviews)
Today, every organization collects data and feedback but very few act on it. Alchemer gives everyone in your...
Compare Learn More

5 (48 Reviews)
SurveyLab is a cloud-based survey solution that caters to businesses of all sizes across various industries. It enables...
Compare Learn More

Best survey tool with many useful and unique features.

QuestionPro is our favorite tool for conducting online surveys. Getting started with QuestionPro is very easy and doesn't require much technical skills. QuestionPro has a very simple and easy to understand user interface in which all the tools are very well placed.
It doesn't take much time to setup a basic survey with a Welcome and Thank You page. To make the surveys look more professional, we can customize every page with the features available in QuestionPro. We can add Multiple Choices to the questions in our survey. We have an option to add images that can be chosen as 'answer' to a question in our survey. We can also use various Graphical Ratings to add ratings like Thumbs Up or Down, Smiley Ratings and Star Ratings.
To make the survey look even more professional, we can fill it with widgets like Maps, Date and Time etc. We can also add time limits to our survey by adding a Timer.
Another best thing about QuestionPro is that we can do Survey Analysis which helps in analyzing data like survey taker's location, interest and the Time and Date when they started answering the survey.

QuestionPro is so far the best survey tool for us but they should do something about the pricing. Some necessary features are exclusive to its Paid version which is a little bit costlier. Other than the pricing factor, there's nothing that we dislike about QuestionPro.

My free trial with QuestionPro

QuestionPro has a lot of potential, they just need to fix the problems that I mentioned and then it might be the best software in the industry.

The software has a very good concept as a whole, it's giving you the right and important tools for your surveys and polls, it shows the data live, you can filter it and export it to excel.
The surveys and polls creator is very user friendly and very professional, you can create some very beautiful polls and surveys.

- You can't color the graphs as you like, if you want to do it, you need to change it with CSS, so if you don't have the CSS knowledge, you just can't change the colors.

- To save the graphs you need to do a print screen, there's no way to export them to your computer.

- The weighting tool is broken and not calculating well.

- There were some reports during our campaign of a very slow loading times, which cause some respondents to stop respond to the poll in the middle.

- The customer service is pretty horrible and not responding, unlike what they claim, nobody answers the live chat, so if you need something very urgent, you need to call them, but it's not sure that they would solve the problem.

The most completely software for online research!

The possibility to customize the panels are incredible!

Some features are limited depending on your licenses

When signing up for QuestionPro, we signed up specifically to use their "FlexGrid" question. I emailed specifically asking which level of membership we needed in order to use this question and was told we needed a corporate membership. Weeks after signing up, after paying and as we were preparing to pilot our study, the flex grid question was suddenly no longer available. When I questioned this, I was told they had decided to move that question type to a higher membership level and it was no longer available. After some back and forth, they let us have it if we paid in bulk for a few months.

Then, once we were collecting our data and exporting it, we realised there was missing data. Luckily, our survey was small and had >35 respondents who we knew and could speak to. In conversing with the respondents, some of them reported filling in data for more flex grid questions then what we were showing in the exported data.

When we contacted QuestionPro regarding this, not only do they not realise the severity of this (it puts into question the validity of all our results and we need to essentially re-run the entire survey, re-contact all of our respondents and confirm their responses), but it also puts into question all of the surveys they've conducted, especially for bigger surveys where their clients might not have personal relationships with their respondents and might not be able to recognise that there is missing data or missing responses.

QuestionPro blamed the missing data on our respondents not filling in the data. I could understand this being the case for 1 or 2 participants (maybe they made a mistake on the form); however, about 40% of the respondents contacted so far have reported that the data we have does not match the data they entered. This is a serious problem.

The data from this survey is completely unreliable and cannot be used for any research. We have to re-run our survey and re-contact all participants.

We needed an easy way to collect data about how our customers were valuing the services we provided. It has also turned into a great tool for training our staff and recognizing services we may be lacking.

The surveys are easy to build with a lot of question types to choose from. The customer service is very responsive, knowledgeable, and friendly. It was also very easy to brand our surveys so customers knew it was from us.

It took a bit of time to get the logic nailed down for our split question.